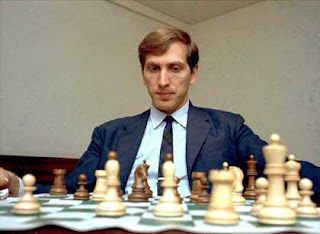 Have you ever heard of Bobby Fischer. I bet you have. He was the only American to ever win the World Chess Championship. He started out as a chess prodigy when he was young. And he quickly became a grandmaster. This guy was not a programmer. But I think he would qualify as a hacker of the highest level. I am writing this blog post because I just found out that Bobby died this past January. I guess I was working too hard to be paying attention to non-computer news such as this.

Fischer achieved his World Chess Championship win back in the early 1970’s. He conquered Spassky for the title in Iceland. However when it came time for him to defend his title, he was unable to achieve consensus with FIDE (the organization that runs the competition). So he forfeited his title to Karpov. However Bobby claimed that he was still the world champion. He states that he only relinquished his title back to FIDE.

Many people consider Bobby Fischer the greatest chess player of all time. Others definitely rank him in the top three ever. I used to play a lot of chess online in Yahoo Games. It would always crack me up when people would log on with names like Bfisher. Usually these were the bozos that sucked at chess. I would give them a hard time too. It was not like I was a chess master. However it was inappropriate to masquerade as Fischer if you were not top notch. Back in 1977, Fischer played three games against an MIT chess computer program. He totally owned the computer, beating it 3 games to 0.

Twenty years after winning the World Chess Championship, Fischer and Spassky had a rematch in Yugoslavia. The United States had an embargo against that country at the time which included matches like this. Fischer proceeded with the match anyway. This got him in trouble with the law. Eventually Fischer was detained in Japan. He called on the country of Iceland (where he first won the title) to grant him citizenship. They eventually agreed and he was released to Iceland.

Fischer remained in Iceland until his death this year. There is a lot more to his story that can be revealed in a short post such as this. I encourage you to buy a book or two on this great chess hacker. Bobby, wherever you are, my black hat is off to you buddy.