The Case of Aaron Swartz 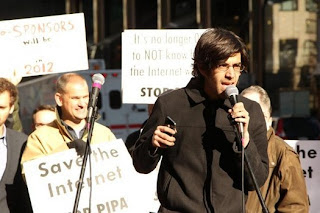 Aaron Swartz was 26 when he hung himself last Friday. He was a co-author of the RSS 1.0 specification at the young age of 14. He was also a cofounder of Reddit, from where he was later fired. Aaron dropped out of Stanford. He created web.py, a Python web framework.

Swartz broke into a network closet at MIT. He placed a computer in the closet to run scripts to download articles from JSTOR, which is a journal storage system. Swartz had downloaded almost 5 million articles. JSTOR did not pursue a case against Swartz.

The Massachusetts attorney picked up the case against Swartz. The trial was to start in the spring. Swartz was pleading not guilty. He was charged with wire and computer fraud under the Computer Fraud and Abuse Act. If found guilty, he could have served up to 35 years in jail. He also may have been liable for $1M in fines.

Previously I had heard about John McAfee going on the run from Belize police. That sounded a bit odd. He was allegedly a person of interest in the murder of his neighbor in Belize. This caused McAfee to go into hiding, claiming that the police were trying to silence him.

Recently I read that McAfee launched a surveillance campaign against police and government officials in Belize. He said that he got a bunch of new laptops. Then he installed some keyloggers on all the PCs. Finally he distributed the laptops free of charge to people of importance in Belize.

McAfee also hired a team of people to monitor the rogue laptops. He then allegedly recorded all kinds of wrongdoing from the subjects of his espionage. Perhaps that is why the law is gunning after him in Belize. If that is true, he better hope that they don't extradite him back to Belize. He might not last long in that scenario.

I do love the premise that McAfee used to put the laptops in the hands of high ranking Belize officials. Part of the draw was that the cost was free. The other vector he used was to have some hotties deliver the PCs to the dudes in charge. Smart. Apparently it worked.