I read about a tech dude who opens a lot of tabs in his browser. He then keeps them open for days. The only problem is that this causes lots of performance problems in his system. He had an inexpensive computer. So he decided to build one on his own to support his strange browsing habit.

Dude's parts came out to $1300. That's a lot of dough for a PC. He spent a lot on a solid state disk drive. It is supposed to be very fast. He figure that Windows uses the drive for virtual memory. So it must be ultra fast. He is very pleased with the performance of the beast. He also got a lot of the latest ran. He sprung for a top of the line CPU.

A lot of people commented that the guy could have switched to using bookmarks instead of tabs. The dude wanted fast access to the data. Another reader thought he could save the web pages off to disk for immediate recall. That still did not sit well with the dude. I thought I opened a lot of tabs. But heck, this guy takes the prize. I guess he did the right thing as long as he is happy. Personally I don't got $1300 to spend on mega browser tabs. 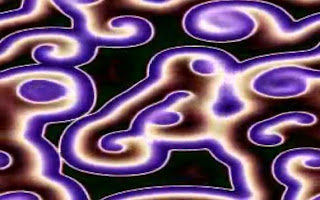 The hacker who goes by the handle Rrola has done it again. He produced a 256 byte intro called Difuze. We are not talking about 256 kilobytes of code here. It is just 256 bytes. This blog post is is probably a lot more than 256 bytes.

I found this gem while reading Reddit. The thing runs in DOS. It has a lot of interesting graphics, with music to boot. The easiest way to experience this program is to watch the YouTube video of it.

So how did Rrola pack such a brilliant changing graphics display in just 256 bytes? He has a set of partial differential equations that govern how the graphics should look. They are rules referred to as the Gray-Scott reaction-diffusion. Thus the name Difuze.

The reason these graphics are cool is because they simulate 2 chemicals interacting with each other. The system also adds back the chemicals as they are consumed. It is like something that occurs in nature. Great stuff. I salute you Rrola. Keep em coming.