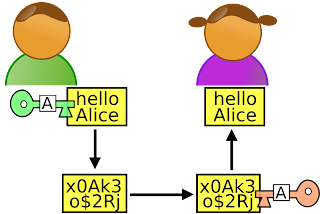 Recall that a cipher is an algorithm which hides data from prying eyes. A very simple example of a cipher is the substitution cipher. This is a one for one replacement of characters. The Germans used such a cipher called Enigma in World War II.

Another cipher example is the transposition cipher. This is where you change the order of characters. It can become complicated depending on the strategy used to do the reordering.

Hashes are used to validate the integrity of some data. You send your original data unencrypted. Then you also send the hash of the data using encrypted methods. The recipient can also compute the has of your original data, verifying that it was unaltered in transit.

Next time I will go over keys and their use in encryption.