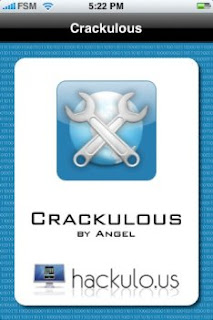 Different mass media sources alerted me to the fact that a program named Crackulous for ten bucks. This application cracks iPhone applications and lets you download and run them for free. The media was surprised that a guy who developed cracking software would be concerned about people cracking his own software and not paying for it. I agreed that it seemed a bit hypocritical.

I decided to try to Google the product to find more information about it. This is where I was surprised upon learning that this software was actually developed by another team of developers at Hackulous. Apparently the guy selling the software had stolen the application himself, and was turning around and trying to sell software that he himself had not developed.

Now I find all of this amusing. Yes it is a shame that somebody took someone else’s software and started selling it as his own. But come on. We are talking about software to crack iPhone applications. No there does not seem to be any honor among thieves.

It is hilarious to see the outrage by readers of the Hackulous site. What do you expect? You are on a site that has posted a free application to steal iPhone software. Don’t be surprised if somebody robs you too. Of course I am making a judgment call here. I am saying that you lose some respect and/or rights when you write software that is itself performing illegal activities.

I guess everybody needs to be worried about piracy. That includes developers who write software to pirate other software. Does anybody else see the humor in this? At least the mainstream media guys found it odd that the guy who stole the software was complaining about people stealing his stolen software. LOL.