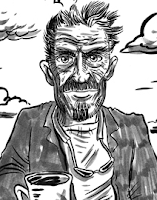 This weekend I read an insightful blog post by John McAffee. His post is a guide to travel. John lives in Belize, a country in Central America that borders on the Carribean. This is the same John McAffee that founded McAffee Associates, the antivirus company. Recently McAffee has been in the news as a person of interest in a murder. But let's get back to the travel guide.

Appanrently it is business as usual for the police to shake down travelers in Central America. And the use of bribes to get past these cops is also common practice. John has a bunch of tips to ensure you stay alive and stay out jail. One key point he makes is for you to stay in your vehicle at all times. That applies even if a cop tells you to get out of the vehicle.

Another theme John reiterates is to stay calm, smile, and negotiate. Cops may try and distract you to plant some drugs in your vehicle. Even that should not phase you. One somewhat radical recommendation from John is to smile, wave, and slowly drive away from the cops. Strangely enough, he says this works a lot of the time.

John calls the bribes "documentation". That is, the cops ask you for documentation. They are actually using that as a code for a small bribe so you can be on your way. I found it hilarious that John often uses some technical manual with a $20 bill stuffed in it as his official travel papers. He says most of these cops can't even read. But they know and appreciate the greenbacks.

You should go to John's blog and reading all the details and scenarios for yourself. This may come in handy if you find yourself on travel in a third world nation.