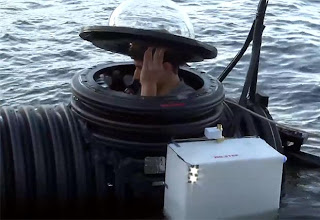 Justin Beckerman has just built a submarine. It cost him two grand. Took him six months to build. The sub goes 30 feet under water. It can stay submerged for over two hours. It is self propelled.

Justin had built subs before. They were not as advanced as this one. His last sub could only go down to a depth of 5 feet. The latest is a new and improved version. Now here is an engineer in the making. Dude is still in high school.

Reminds me of a guy I went to high school with. This guy built a robot. Then he upgraded it with rocket launchers. That thing was definitely not legal. LOL. The best part was that he controlled the robot with an Atari computer. Sweet.