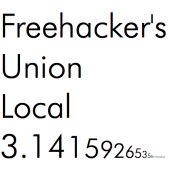 Some time back I read a rant on the web from Zed Shaw. He was planning to start up the Freehackers Union. This would be a meeting of like minded hackers in big cities around the world. You had to present some hacker project of interest to be able to attend the meetings. He was fed up with the business people getting in the way of true hacking.
Zed is an outspoken guy who lives in New York. Not surprisingly the first Freehackers Union meeting was held in New York. Zed is known for previously working in the financial markets. I think he was an employee at Bear Sterns. He was previously associated with Ruby (and maybe Ruby on Rails). I think he got into too many arguments with the powers that be in the RoR world. Zed talks like a tough guy. This may be due to his surroundings (New York), or perhaps because he knows some martial arts, or maybe even because he thinks he is a tough guy,

Enough about Zed. I listened to the first Freehackers Union audio broadcast from Zed’s web site. It seemed like a big rant about ideas. I guess that was the whole point of the meetings. Most people in the crowd did not present anything that day. There seemed to be a rule that you could not present using PowerPoint (remember that this was about rallying against the business guys).

One presenter had written an Objective C program for the iPhone. He got a lot of applause. There were a bunch of other technical presentations. I heard that there were plans to have such a meeting near my house. Initially it sounded exciting. Doesn’t everyone want to be part of some cool underground and elite group? Unfortunately it appears that the Freehackers Union did not really materialize past the initial New York meeting. Oh well. Maybe it is time to look around for a local 2600 Magazine meetup.