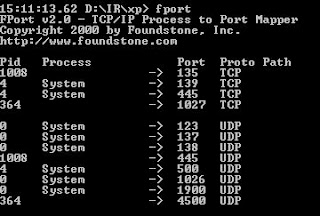 FPort is a free command line Windows program that identifies open ports. It is like the netstat program, but also shows information on the processes that opened the ports. This program was created by Foundstone and is distributed by McAffee. Foundstone is a security company.

Version 2 of FPort added support to run on Windows NT, Windows 2000, and Windows XP. Although the program itself is free, it is not open source. You get the executable and a readme file for free. No source code is included.

FPort works for both TCP and UDP. It can tell you the name, PID, and path of the program that opened the port. You can sort the list of ports by port number, application name, PID, or path. Run this program often to see if there is malware communicating with other machines on the Internet.

FPort runs only on the Microsoft Windows operating system. However if you are on a UNIX box, they have the lsof (List Open Files) program that is very similar.