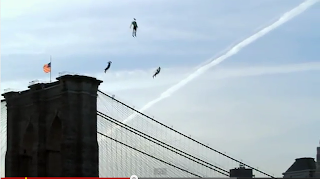 How do you get people to fly around in the air above New York City? You create some remote control air planes that looks like humans. I was checking out some blog posts by Giles Bowkett when I saw this video. It is pretty freaky how real the planes look. I might have been disturbed if I were driving on the bridge while these "people" were flying above.

At first I thought this was just some guys with a wild side project. By the end of the video, I figured out this was some sort of promotional stunt for the movie Chronicle. That still did not take away from its awesomeness. In the middle of the vehicle I saw some type of octagon shaped vehicle floating in the sky. I wondered whether this device helped control the planes. Nope. Later I figured it must be some sort of aerial camera to shoot the planes and peoples' reactions.